Halloween on Vulcan: The Ears

The first thing most people think about when they hear "Vulcans" is the distinctive pointed ears.  Those ears have been re-created many times as Halloween products going back to Star Trek: The Motion Picture in 1979. In the 1960s and 1970s, the closest we got were full face or head masks.  Here are some ears from my collection.  Please let me know if there are any I'm missing!

In 1979, Aviva Enterprises released a set of Spock ears for The Motion Picture. I haven't been able to verify if these were out for Halloween 1979. The film was released in December so they may not have been around until Halloween 1980. These I only discovered two weeks ago. I bought them on eBay but they haven't arrived yet so this image is from the eBay listing. 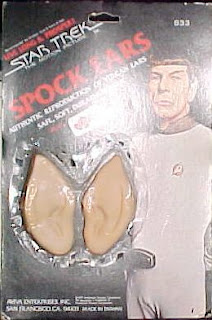 In 1982, for Star Trek II: The Wrath of Khan Don Post Studios had the license to create "Star Fleet Collectibles." These included uniform insignia, Khan's pendant and Vulcan ears. I think the shape of these is perfect. The sculptor obviously paid close attention to images of Spock while working. 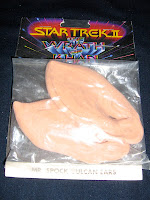 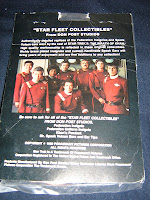 In the 1980s, Rubie's also released a set of ears. From the artwork, it's clear they're Spock ears but Rubie's didn't have the Star Trek license until 1992. 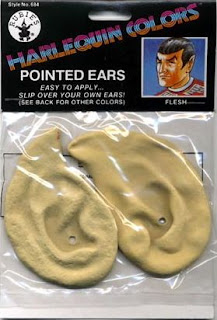 In 2009, Rubie's created a series of ears with two different sets of packaging. The first were packaged as Star Trek XI ears and the second were packaged as TOS ears. The sculpt is obviously the same. 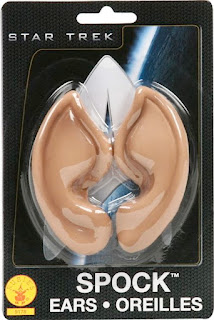 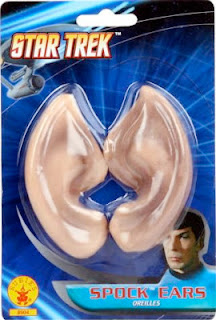 For those who wanted a less cumbersome piece, Rubie's also created sets of ear tips. In theory this is a great idea since the screen-used ears are just tips as well but these are designed pretty poorly. They are usually warped and the colouring is not very authentic. Once again, the same sculpt was packaged for both Star Trek XI and TOS. 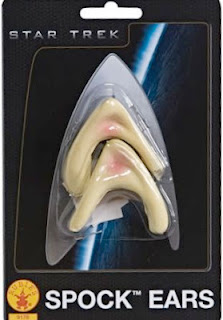 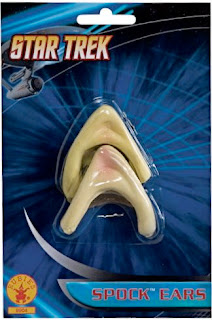 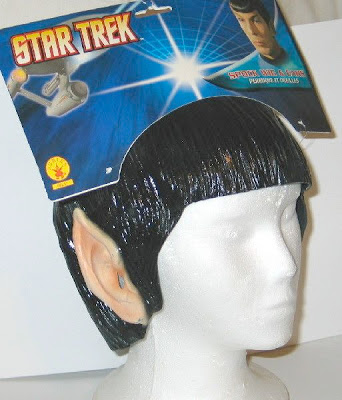 Over the years there have also been a slew of non-licensed ears. There are various generic ones of different colours so they can be sold as "alien ears" or "elf ears" or "devil ears" or whatever. 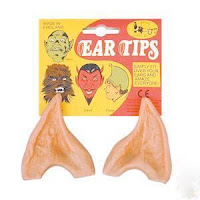 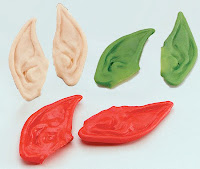 The best of these are the ear tips made by Woochie. These are the type that I have been using since I first dressed as a Vulcan in 1996. They come in different sizes and the edges can be pretty well blended to your skin. They are a bit more pointy and less curved than I would like but they're perhaps the most "professional" ears available. 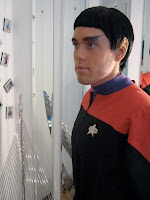