The toy license for JJ Abrams' Trek films was picked up by Hasbro.  Frankly, the offerings are not that exciting or impressive.  The first Star Trek toys released by Hasbro are part of their Fighter Pods series. They have already released similar Star Wars and Marvel products. 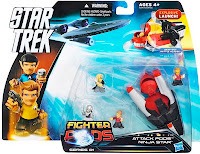 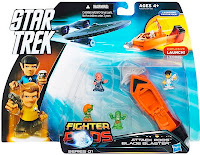 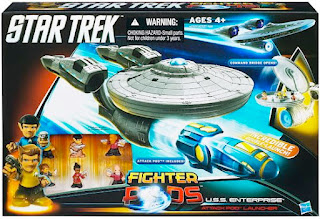 These are not being marketed heavily.  In fact, they don't even appear on Hasbro's Canadian website.  As far as I can tell there are 36 figures and three launching pods.  You can place the figures into small transparent plastic balls and launch them from the pods at each other.  It doesn't fit well with the Star Trek universe which may be why they aren't being marketed more. 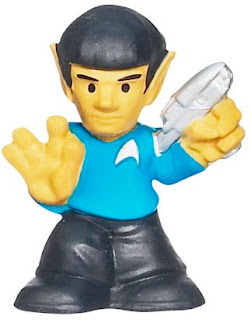 Of the 36 figures, three are Spock.  There are also two Romulan figures which may be of interest to Vulcanologists.  The figures can be purchased individually in "mystery" packages or in small sets as pictured below. 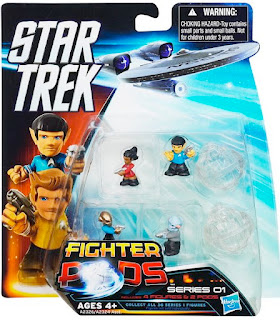 Since I wasn't interested in the pods themselves I sought out just the Vulcan and Romulan figures on eBay.  I found it difficult to take good photos of them because they're so tiny (no more than an inch in height).

Overall, these are nothing to write to New Vulcan about.  I suppose the exaggerated features are sort of cute but the emphasis is clearly on action and battle which will appeal more to fans of Star Wars than to Trekkies.