In this post, we continue to unpack Michael Burnham's Graduation as seen in Star Trek: Discovery "Lethe". The first prop that caught my eye in these scenes was the staff held by the Vulcan Director. 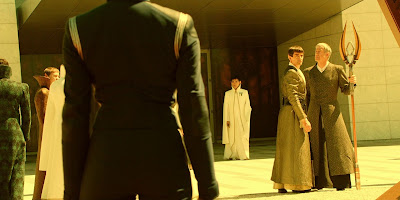 I believe this prop has its origins in the spears we saw in Star Trek III. There are some similar design principles with a central piece flanked by two pointed shapes. The one appearing in "Lethe" seems to be larger and have more heft to it. The Star Trek III spears always seemed, to me, to be somewhat more ceremonial and even delicate. 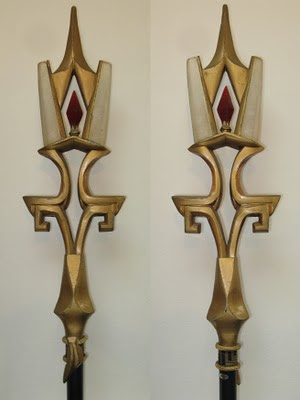 Another possible influence for this prop is the Debrune Teral'n sceptre wielded by Nero in Star Trek (2009).  This prop was created by Russell Bobbitt and his prop team for the movie. It lacks the symmetry of the Vulcan props but given the shared origins of the Vulcans and Romans it might make sense that an ancient item like this shared design characteristics with Vulcan objects.

The shapes and design of the Director's staff are echoed in some pieces of set decoration that can be seen in the background.

The other prop that most Vulcanologists will have spotted immediately is a Vulcan Lyre being played by one of the graduates in the background. 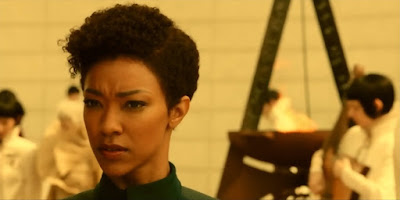 It's difficult to be certain because the lyre is out of focus, but I believe i can count 28 strings on this version. The lyres we have seen in 24th century Star Trek all had 12 strings but if you look at Spock's original lyre it had many more. It seems like the Discovery team were using Spock's original as a model here. It's possible that this lyre is also larger in size that previous versions we've seen. Again, the out of focus image makes it difficult to say. It could also be that the musician is fairly small person. 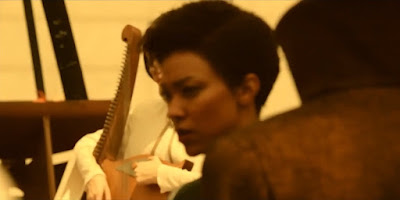 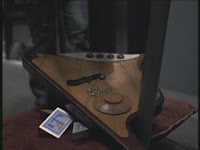 Eagle-eyed Vulcanologists will have noticed something fascinating in the distant background of one of the above images. There is a T'Plana Hath-style ship visible on the surface! This style of ship was first seen in Star Trek: First Contact. It's possible that the Vulcans could still be using this class of ship 200 years after first contact with Humans, after all, if it ain't broke, don't fix it! Another possibility is that this is a sculpture or monument. I like to think that it is the original T'Plana Hath and that it has been converted into a museum. There is lots of precedence for Starfleet vessels being turned into museums after being decommissioned so it's possible. 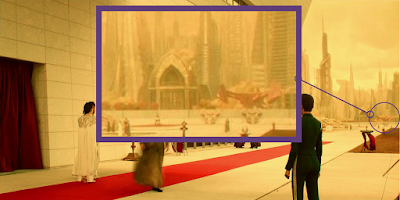 The structure next to the ship is also interesting. It borrows heavily from the architecture we saw on Vulcan in Star Trek: Enterprise. For example, this shot from "Kir'Shara". 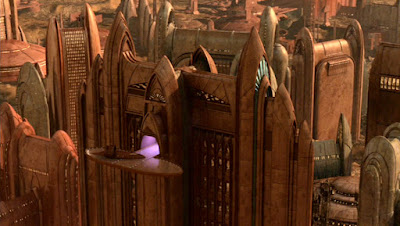 The spire-like buildings in the background are, as noted here, fairly similar to the designs we saw in Star Trek (2009). I think we get a closer look at similar structures in the artwork created for the Hidden Universe Travel Guide to Vulcan. 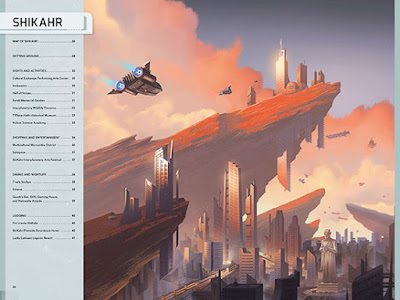 All of this just demonstrates that the Discovery team is paying a lot of attention to detail. They clearly love Star Trek and are making a new series that fits well into established canon. For the moment, that is all I have to unpack from Burnham's Graduation, however, there is still more fascinating Vulcan content in "Lethe" that I will discuss in my next post. 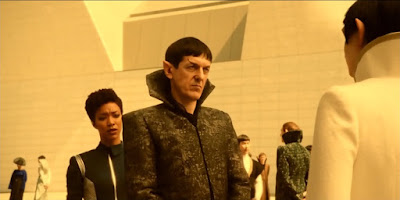 The costume designer for Star Trek: Discovery is Gersha Phillips. I discussed her work a little bit earlier this year when one of Sarek's costumes was on display at SDCC but we now have a treasure trove of work to discuss!

It seems to me that the Discovery Vulcans are influenced most by Michael Kaplan's Kelvin Universe costumes. The high collars, textured fabrics, and long, clean lines we see at Burnham's Graduation are very much in line with the Vulcans we saw in Star Trek (2009).

These costumes are much less ornamental than most of the Vulcans we've seen previously. The person who's designed the most Vulcan costumes is Robert Fletcher for the TOS films. Most of those were for religious or spiritual characters. The simpler styles we've seen from Kaplan and now Phillips seen to be largely for politicians and scientists.

Having said that, we do get some tantalizing glimpses of jewellery at Burnham's Graduation. Most of it is worn by female characters, including Burnham herself. The brooch that Burnham is wearing is clearly a reference to Spock's Kolinahr necklace from The Motion Picture. 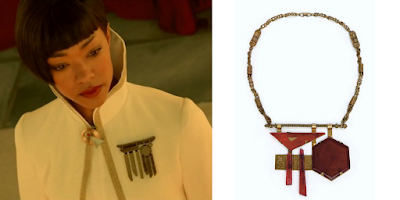 It seems like the people dressed in white robes like Burnham's are the students who have just graduated. The woman to the left of the following frame is wearing a similar brooch but one that is less ornate. There are other graduates in the scene wearing the same brooch as Burnham. The variety of styles possibly suggests differences in academic standing. Burnham's more ornate brooch indicates her higher achievement.

These graduates also wear IDIC pins at their throats. A pin like this was included in the SDCC exhibit. The Vulcan Director (Jonathan Whittaker) wears a small pin at his throat as well. I haven't been able to capture an image of sufficient quality to see the detail. It could be that there is no symbol on this and it is merely decorative. 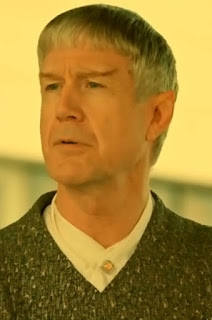 The other jewellery in the scene is worn by Amanda Grayson (Mia Kirshner). Without more information it is difficult to know for certain, but I would say this jewellery looks Human rather than Vulcan.

Besides those we see on clothing, there are additional symbols we can pick out in this sequence. 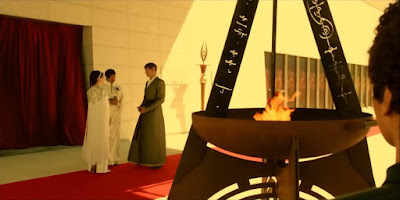 The metal sculptural pieces that I discussed briefly here are engraved with Vulcan calligraphic script. In previous Star Trek incarnations this script has not been given formal meaning. Fans like those working at korsaya.org have ascribed meaning to calligraphic symbols we have seen. It is possible that the Discovery team has used this fan work to inform what we see on screen. It's equally possible that these are simply decorative or that the Discovery team has created a system of meaning for them. We need more information to be sure. 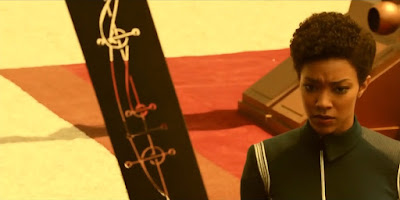 There is still more information to unpack in Burnham's Graduation! Next time, I will discuss the props and ships we see in this sequence. 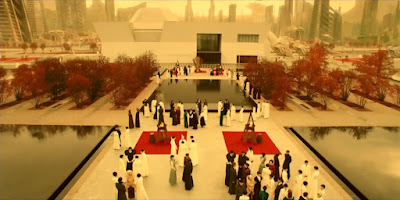 This week's episode of Star Trek: Discovery is "Lethe" and it is a Vulcanologist's dream come true! There is a great deal of information to unpack so I will be writing a series of posts. In this post, I'll discuss what are presumably the grounds of the Vulcan Science Academy where Burnham's graduation from that institution took place. We see this in "flashback" scenes in which Burnham relives some of Sarek's memories from that day thanks to their katric bond.

These scenes were shot at the immediately recognizable Aga Khan Museum in Toronto. I was thrilled to see the Discovery team using Toronto locations and I hope we'll get to see more as the series progresses. This really is a perfect location for Vulcan. When I was last there, it was a sunny, August day. The building and the surrounding grounds are all made of white stone and the sun reflects brilliantly off it. It's beautiful but also sometimes painfully bright. I could well imagine Vulcans relying on their internal eyelids in this place! Below are some pictures i took on my last visit. 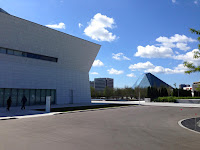 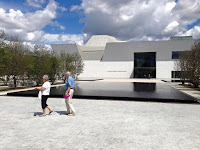 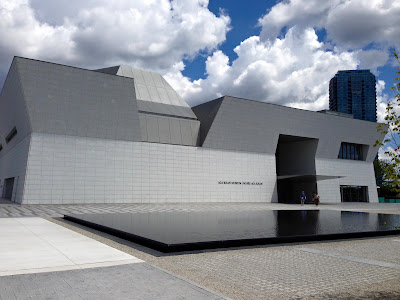 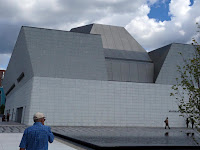 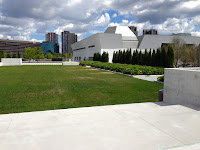 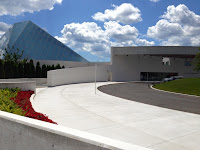 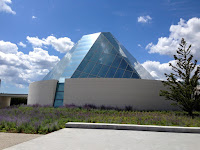 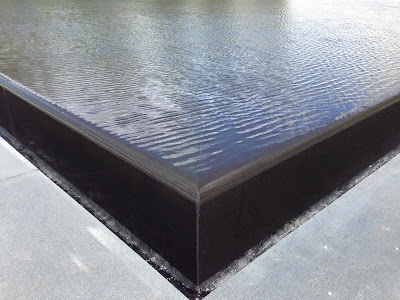 The museum opened in 2014. The buildings and grounds were designed by Fumihiko Maki, Charles Correa, and Vladimir Djurovic. They have a wonderful permanent collection of Islamic and Persian art and they also bring in fantastic temporary collections. I highly recommend visiting it if you're in the neighbourhood.

The Discovery team made great use of the space and they had a considerable amount of visual effects work to do to alter the background. The digital city they've created is very reminiscent of the shots of Vulcan we got to see in Star Trek (2009).

The area is dressed with some beautiful metal sculptural pieces that are very much in line with designs we have seen in "Amok Time", Star Trek III: The Search for Spock, and "Home".  The coffin-shaped gong is a motif that has carried through Vulcan design since the very beginning. I'm glad to see the Discovery team kept it. They've also maintained the triangular design motifs that I discussed previously here. 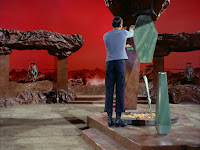 The Aga Khan Museum makes an incredible backdrop for a compelling scene in which Burnham and Sarek fight using the Vulcan martial art, Suus Mahna. Suus Mahna was first mentioned in the Star Trek: Enterprise episode, "Marauders". T'Pol was trained in it. Burnham used it earlier in "Context is for Kings."  In the first episode of After Trek, James Frain teased that we would see Sarek using Suus Mahna. In this week's episode of After Trek, Frain said that he and Sonequa Martin-Green performed the Suus Mahna choreography without stunt doubles.

In future posts I will discuss more of the Vulcan treasures packed into "Lethe". This episode was written by Trek veteran, Joe Menosky and long-time Trekkie, Ted Sullivan. I'd like to thank them for their excellent work on this episode! 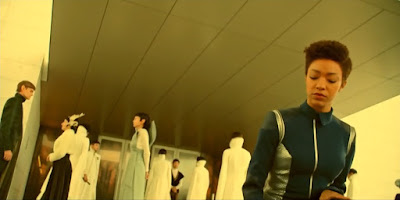