"Mr. Spock, the mind of the Enterprise.  The fearless genius who ensures a calm force of intelligence guides their every mission.  But look deeper and you will see an outsider who does not belong.  A man of two worlds.  This tears him apart; a constant battle between what he thinks and what he feels.  What does he do?  Does he follow his head, embracing logic and the path of reason or does he follow his heart, knowing the emotions he cannot control may destroy him?  I will help him decide."

A new poster has been released for the Star Trek Online Legacy of Romulus expansion (read: here). 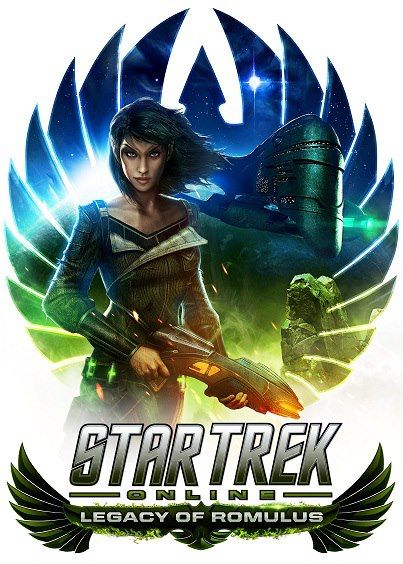 I haven't written much about Star Trek Into Darkness because I'm not really looking forward to it.  Before we had any news about the film I was hopeful that it might be better than Star Trek (2009) but all the rumours I confirmed here last April have been proven accurate.  Of course I'll still go to see it but I don't have high hopes.

The first two posters released for the film were awful.  First of all, they're unoriginal; ripping off everything from Batman to Transformers.  Second, they're so dark!  Obviously that's what the filmmakers are going for (just see the title) but that's not Star Trek to me. 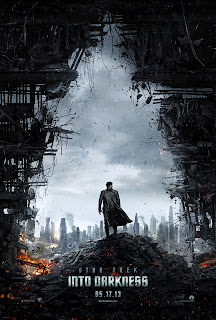 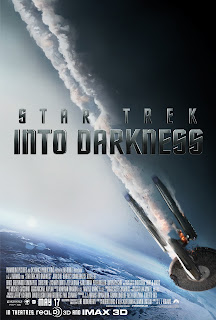 When Paramount began releasing posters for each of the characters I had high hopes that the Spock one might be nice.  The first Spock poster features Spock inside the Nibiru volcano.  I don't love this one but it's at least not awful.  The second one features an armed Spock.  In fact, most of the character posters feature armed heroes.  Guns are also not something I associate greatly with Star Trek.  Also, given all the gun controversy in the United States in past six months it just seems like poor taste. 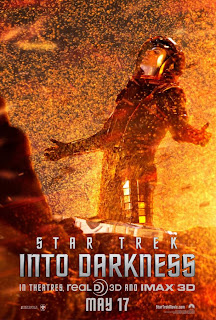 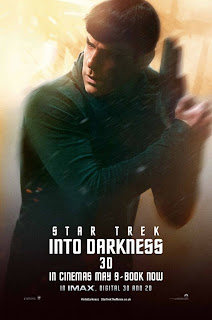 There haven't been any great publicity photos released.  There are lots of stills from the film but the only other posed image I've seen is the fold-out cover from Empire Magazine. 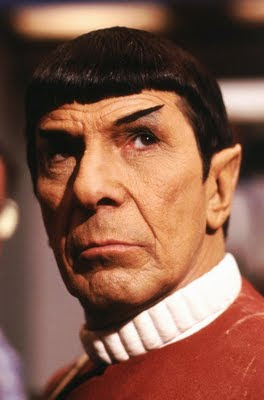 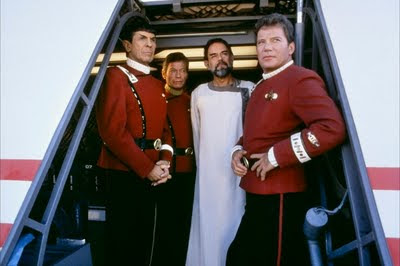 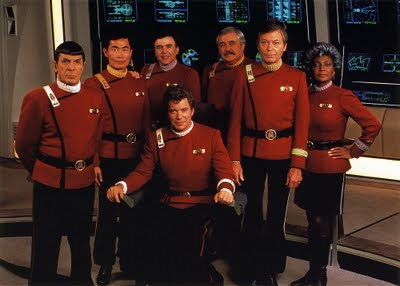 The past few days have seen me fall into a place of deep despair.  Those who know me well will know that I suffer from severe depression.  Every day this week saw new reports of incredible tragedy and human suffering.  I internalized all of these events.  I felt them all as personally as my own pain. Cowardly bombings in Baghdad and Boston that left many dead and others permanently scarred in body and mind, devastating earthquakes that killed hundreds, an explosion in Texas that rocked a small community, the rape of a five year-old girl in India and subsequent violent protests, a good friend who is losing a parent.  More than these events themselves, I was appalled at how they were reported in our news and social media.

I read so many horrible posts and comments so filled with ignorance and hate. News reporters latched on to the fact that the suspects in the Boston bombings were born in Chechnya.  Ignorant of geography and too lazy to bother to check their facts, some of these reporters then began to blame the political situation in the Czech Republic for creating potential killers.  Of course, the Czech Republic is not Chechnya.  Moreover, these two boys (for that is what they were) were more American than Chechen. I started to see horrible, mind-boggling discussions about "evil Muslims" and then people referring to Islam as a race.

Paranoid gun rights lobbyists started using the situation to create a platform saying that Obama's proposed expansion of background checks to purchase firearms were to blame for the tragedy.  Apparently if everyone was armed the bombings wouldn't have taken place.

Facebook and Twitter were full of comments from people supporting alleged rapists in Nova Scotia and California after two teen girls committed suicide after having allegedly been raped by groups of teen boys.  These people ignored the tragedy that two young people had been so desperate they felt the need to end their lives.  The victims' families were left to battle this ignorance.

I don't want to re-hash any of this.  Suffice to say that I found it all profoundly troubling.  I didn't sleep well for a few nights and it got to a point overnight on Friday where I made myself physically ill by dwelling on these events and the conversations they sparked.  I felt incredible shame.  I was ashamed to be Human; to be part of a species that could commit such crimes against itself. There was so much hate, anger and pain that it seemed to engulf my world in a dark black cloud that obscured any goodness.  I could do nothing much yesterday except sleep fitfully all through the day, exhausted and hurting.

During the week I spent my evenings re-watching the original 6 Star Trek films.  I wanted desperately to escape into a place of comfort.  I wanted to find people I could relate to and people I wasn't ashamed to be similar to. Consequently, I ended up isolating myself and ignoring those closest to me. This morning, I found my mind dwelling on Star Trek V: The Final Frontier which is perhaps my least favourite of the original films.  I couldn't get Sybok out of my head.  I kept repeating his call "Share your pain with me and gain strength from the sharing."

It seemed to me that there was something valuable in those words even though the film seems to say the opposite.  Kirk tells Sybok that he won't give up his pain that he "needs his pain."  Yet we see others for whom the release of pain is transformative.  McCoy, for example (in one of DeForeset Kelley's greatest moments) is freed from torment when he shares the pain over the loss of his father.

It occurs to me now that it is not the release of pain that is helpful.  It is the act of sharing it with someone else.  Donne said that "No man is an island" and I must admit that he was correct.  Humans have need of a collective experience.  As much as some of us may wish to live completely independently it is not realistic.  If our ancestors had thought that way we would not be here now to debate the idea.  It is important, and possibly essential to our happiness that we share our pain (and joy) with others who can understand it. It will never go away but like the weight of water spread across the bricks in a dam, the pressure can be lessened.

There is a reason that there is no single star of the original Star Trek.  The trio of Kirk, Spock and McCoy is important because it is only together that they find peace and satisfaction.  It is almost as if they are not a whole person unless they're together.  Maybe these musings will seem naive.  I am somewhat emotionally stunted and it takes time for me to figure these things out.  I have an amazing set of friends and a wonderful family and too often I try to shut them out and deal with things on my own.  That might be the Vulcan way but, as much as I am loathe to admit it, I do not have the mental discipline to make that work.  I am Human and part of being Human is that the adventure must be made together.

Social media has made it possible for us to be connected to more people in a month than some of our ancestors may have known in their entire lifetimes. Some people collect friends on Facebook like I collect Star Trek items!  It's not the quantity that's important.  It's the quality of our relationships that matters and that quality is entirely dependent upon us.  Our relationships become what we build them into.  Sometimes, a shared experience with one other person is of such quality that great evils perpetrated by many others can fade into memory.

As I struggle personally with being part of an imperfect species I have to remind myself that everyone else is doing the same thing.  As my sister reminded me last night in a blog post of her own, tomorrow is a new day. Though the cynic in me immediately responds that it will never be a new day for the victims of last week's tragedies, it will be a new day for us.  We can make it brighter by being together, remembering those we've lost and trying to understand how we could have helped those who brought so much pain to so many people.  It's when the pain remains secret that it hurts us more.
Posted by scottlukaswilliams at 4/21/2013 02:25:00 PM No comments:

The Kolinahr Museum website has gone live!  Curated by my friend Jordino who has the largest collection of Vulcan props and costumes in the world, the museum is now open for public viewing. 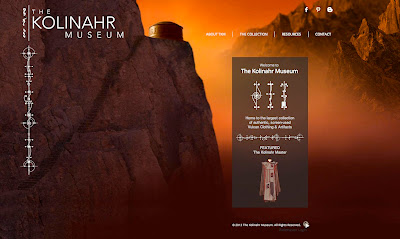 “ The Mission of The Kolinahr Museum is to collect, preserve, study, exhibit, and stimulate the appreciation for and advance the knowledge of Vulcan art and artifice, that collectively represent the broadest spectrum of Vulcan achievement and culture.” 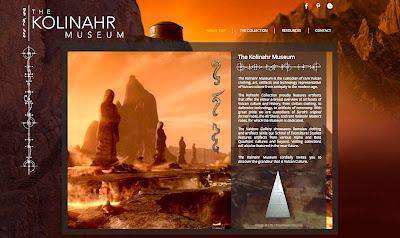 The museum features three main galleries: the Valdore Gallery for Romulan costumes and props, the Kolinahr Collection for Vulcan items and an Exocultural Studies section for costumes and props from other Star Trek cultures.  Please check out the site and "Like" it on Facebook!