Profiles in History is gearing up for their 44th Hollywood Auction.  It takes place May 14 and 15, 2011.  There are lots of great items with ridiculously high prices.  Two items in particular will be of interest to my fellow Vulcanologists. 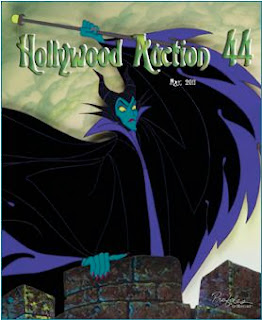 First, lot 1545 is a piece of concept art by John Eaves featuring the Vulcan homeworld.  It was created for the Star Trek: Enterprise episode "Home."  It has an estimated price of $400-$600 which is more or less in line with other Star Trek concept art. 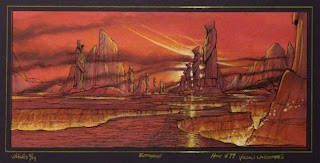 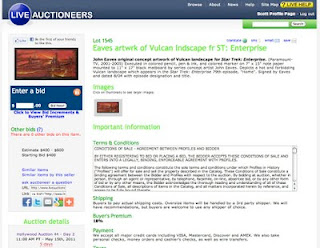 Second, lot 1457 is the wonderful Robert Fletcher Spock Kolinahr costume from Star Trek: The Motion Picture.  Though this piece is iconic and rare I think it's hardly worth the estimated $30,000-$50,000.  Spock costumes are few and far between but the distressed nature of this one and the fact that it is seen on screen for less than 5 minutes reduce its value.  I'd say a more reasonable price for this might be $10,000-$15,000.  We'll see how it does at the auction! 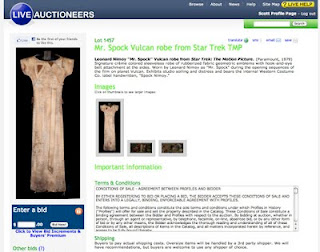 UPDATE: Unsurprisingly, the Spock costume was passed over at auction this evening.  $30,000 is a ridiculous opening bid for this piece.  Though there was healthy bidding on some of the Star Trek items in this auction a great many were passed over.  The opening bid prices were simply too high.  The John Eaves concept art sold for a solid $700.