Vulcan's Forge is the first Star Trek novel by collaborators Josepha Sherman and Susan Scwartz.  It was published in hardcover by Pocket Books in 1997 with a cover by Keith Birdsong and has subsequently appeared in mass market and audio book editions. 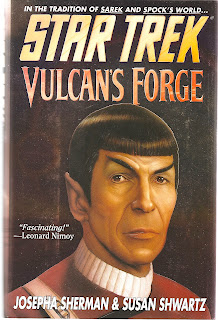 The story takes place in 2296 about a year after the loss of James T. Kirk in the Enterprise-B mission to rescue the El-Aurian refugees from the Nexus. Spock is captain of the USS Intrepid II (why it's called 'II' and not 'A' is unexplained) and among his crew are McCoy and Uhura.  The Intrepid is called to the planet Obsidian where a Starfleet officer named David Rabin is in charge of relief operations for the pre-industrial society who lives there (seemingly in contradiction to the Prime Directive).  When Rabin's efforts begin to be dangerously sabotaged he concludes that his opposition is made of more than just local malcontents.

When Spock arrives, he and McCoy beam down with an away team to try to assist Rabin.  It turns out that Spock and Rabin are childhood friends and from this point on the novel alternates between events of the 2296 present and Spock's childhood.  Rabin and his Starfleet captain mother were stationed on Vulcan and attended a coming of age ceremony held for Spock at Mt. Seleya. That event was disrupted by a Vulcan named Sered who believed that Vulcan should withdraw from the Federation.  Chaos ensues and several people are killed or taken hostage by Sered and his followers.  Young Spock and David find themselves alone in Vulcan's dangerous Forge where they must survive for several days.

In the present, signs point to possible Romulan interference on Obsidian and Spock and David seek out the native desert-dwelling nomads in hopes of discovering the truth.  Along the way, McCoy is kidnapped and the mission turns into a rescue operation.  It turns out that Romulans are involved but they are being led by none other than Sered!  Spock and Sered end up wrestling, bare-chested in the desert.  Of course Spock wins and he makes a friend among Sered's Romulan followers. 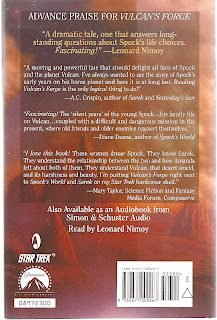 Spock and David's trials in the Forge as youths prepared them to survive on the harsh desert world of Obsidian decades later.  The young men were eventually able to help rescue the hostages and defeat Sered.  Spending time with humans and Starfleet officers gives Spock the idea to join Starfleet Academy rather than the Vulcan Science Academy which begins the great feud between Spock and Sarek.  Spock's dealings with Sered and the Romulans in Obsidian's desert gives him an idea for a new direction in life and he resigns from Starfleet to begin training as a diplomat.

Overall, I find this novel too convenient.  Obviously the authors created a parallel story structure that they liked and it works pretty well but the fact that Sered is the villain in both stories doesn't make much sense.  Also, I find the relationship between Spock and David Rabin a bit too folksy.  We never even see Spock interact with Kirk as he does with Rabin so it just isn't especially believable.  Spock's time away from the Intrepid gives Uhura a chance at command which is a rare occurrence in Star Trek novels but the way she's written doesn't seem entirely consistent with her character on film.  Her voice just seems wrong.

What the novel does well is explore the idea of how Spock and McCoy deal with Kirk's death.  I think it makes sense that McCoy would try to stay near Spock and that they would grow closer.  I also like the links to the animated series episode "Yesteryear" in which Spock begins his road to adulthood.  The novel is clearly trying to set the stage for Spock's unification overtures with the Romulans.

This is the first Star Trek novel by Sherman and Schwartz and Star Trek is not easy to write well.  I think, structurally the novel works well.  The plot is strong enough to work but as with so many Star Trek novels, there are some inconsistencies in character and canon that bother me.  Sherman and Schwartz went on to write a series of books exploring the Vulcans and Romulans further so I look forward to reading on!