Galoob held a license to create Star Trek toys from 1988-1997.  In 1988 they launched the first Star Trek: The Next Generation action figures and later they created a successful line of Star Trek MicroMachines.  But in 1989, they released what are perhaps the worst Star Trek action figures ever made, for Star Trek V: The Final Frontier.

By 1989, high-end Trek collectables were becoming very popular so instead of standard action figures, Galoob released five "Limited Edition" figures that were more like statues made of rubber: Captain Kirk, Spock, McCoy, Sybok and Captain Klaa.  Obviously, the two Vulcan ones are of interest to us here.

Without a doubt, this is the worst Spock figure ever created.  It looks like a Vulcan but nothing like Leonard Nimoy.  The head is disproportionately large and it features one of the ugliest Starfleet uniforms ever designed. 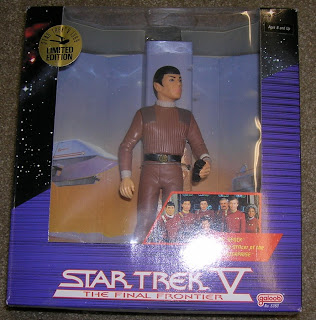 This figure does have articulated arms but, like the others, the feet are mounted to a black plastic base embossed with the film's logo.  The base has a slot at the back to slide in a cardboard backdrop.  The art on the backdrop might be the best feature of this figure. 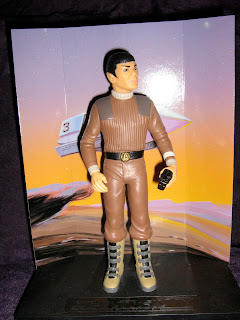 The Sybok figure is slightly better.  His head is not quite as disproportionate as Spock's and the sculptor did a good job of recreating his costume, albeit in a basic, textureless fashion. 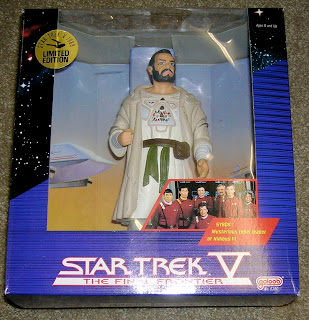 Sybok has no articulation whatsoever.  He reminds me a bit of the giant, hollow vinyl Marshmallow Man figure from the Ghostbusters movie. 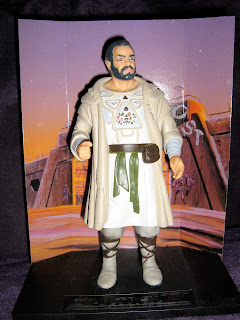 Overall, perhaps these are fitting collectables for the Star Trek film that is least popular.  As action figures they are sorely lacking and as higher-end collectables they are also sorely lacking.  Lost somewhere between two worlds, these items are still fairly highly sought-after since not very many seem to have been made.