Emmy Award-winner Mike Minor is another of the incredible Star Trek artists who is not well-known but deserves to be!  He was born on September 25, 1940 and one of his first Hollywood jobs was working as an artist on Star Trek: TOS beginning in 1968.  He was responsible for designing the Tholian Web from the episode of the same name and the Melkotian from "Spectre of the Gun."  Minor also created many of the wall paintings and diagrams seen on the USS Enterprise.  He went on to work on fan favourites like The Beastmaster and The Man Who Saw Tomorrow and won his Emmy for visual effects on The Winds of War. 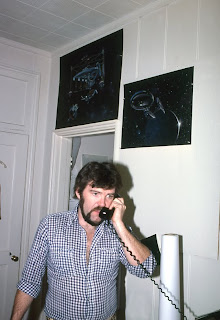 Years later, when Gene Roddenberry began developing Star Trek: Phase II, he hired Minor as a conceptual designer.  Minor contributed to the overall design of the new USS Enterprise and also to many of the interior sets including the Bridge, Sickbay and Engineering.  Many of his designs remained intact when Phase II became Star Trek: The Motion Picture.  Moreover, many of his designs influenced those who designed Starfleet sets for the next 30 years.  It is for Star Trek: TMP that Minor contributed to Vulcan design.

Minor worked on designing the planet Vulcan for the scene where Spock addresses the Vulcan Masters.  Recently, Rick Sternbach sold four original pieces of Minor's art for this sequence on eBay.  This is the first time they have been seen by the general public because they have been in his private collection since Minor gifted them to him in 1979. 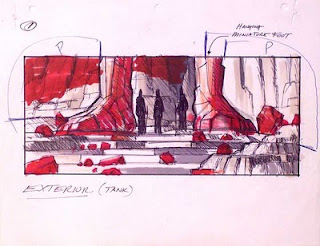 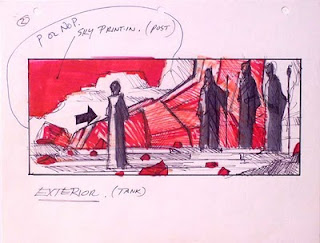 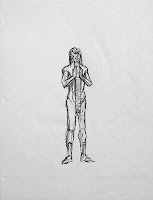 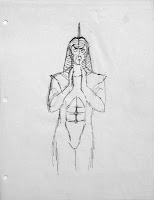 Most of this sequence was shot in a large outdoor tank at Paramount.  It's clear from this illustrations just how much influence Minor had on the design of this set.

Sternbach remembers that "...Mike was frequently out in the middle of the Paramount lot in front of the giant "B" tank, directing where the foam spray gun guy was to point his nozzle (to make the hot springs landscape), and wrangling the giant red fiberglass feet of the statue with the staff shop crew."  He says that "Mike was truly enthusiastic about SF and film; he knew a great deal about its history, knew a lot of people in the business, and had a great design sense."

Famous Hollywood curator, Bob Burns, was good friends with Mike Minor.  Burns remembers "Mike Minor was like my younger brother. My wife and I meet him when he was 18 years old and immediately became the best of friends and were until the day he passed away. It still hurts till this day. Not only was he incredibly talented he was also one of the greatest people on the face of the Earth."  Mr. Burns went through his archives for me and dug up this rarely seen piece of work by Minor.  The top image is an actual photo from a shoot at Yellowstone.  The foreground is a detailed miniature that was suspended in front of the camera.  The lower image was modified by Minor featuring a beautiful background painting that was, unfortunately, not used in the final film. 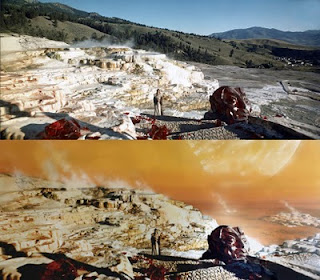 The completed shot is different from what Minor originally proposed but his influence is obvious.  Here are two different versions from different editions of the film.

That red head that appears so mammoth on screen was actually a miniature about 8 inches across.  It was made of resin and recently sold at the Profiles in History Hollywood Auction 40. 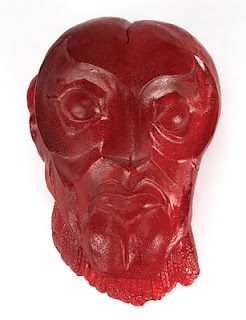 Rick Sternbach worked with Mike Minor and Bob Burns on Burns' 1979 Halloween Alien Extravaganza.  Sternbach remembers "Mike was essentially the production designer on that, and we all merrily glued and hammered and detailed the Nostromo set piece. Walter Koenig played Captain Dallas; it was a great deal of fun."

Mike Minor would have celebrated his 70th birthday later this month if he had not been tragically taken from the world too early.  He died of complications from AIDS in 1987.  It is to remember people like Mike Minor that I participate in the AIDS Walk For Life every year.  It has now been 30 years since this horrible disease was properly identified and it is still a worldwide pandemic.  Over 33 million people across the globe are living with AIDS now and it kills over 2 million people a year.  This year's walk is on September 19th.  If you can, please help by donating to the cause.

Though they're not Vulcan-related, I wanted to also share these images of Minor's art for Phase II and TMP.  They are from the collection of Bob Burns and have rarely been seen so clearly. 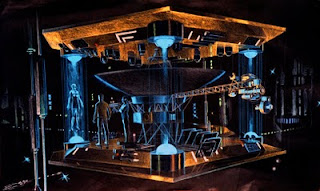 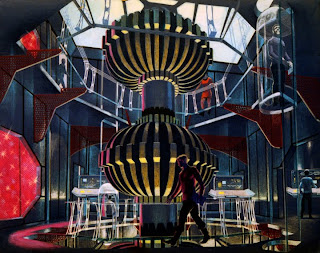 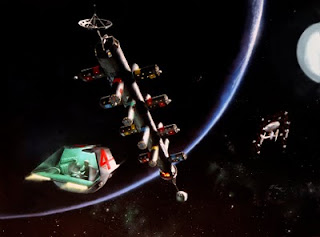 I would like to thank Bob Burns and Rick Sternbach for sharing their recollections of Mike Minor with me and for opening up their collections to share his art with us all.