A week ago, we lost an amazing human being.  It's taken me this long to collect my thoughts about Leonard Nimoy, the man who was Spock.

I feel priveleged to have met Mr. Nimoy a few times.  I will cherish the brief moments I spent chatting with him and I am far from alone.  Leonard Nimoy touched the lives of millions of people on this planet and he will continue to do so through his great body of work on film and television, his published poetry and memoirs and his stunning photography.  I am grateful that the Nimoy family shared so much of Leonard with the world.  It cannot have been an easy thing to do sometimes. 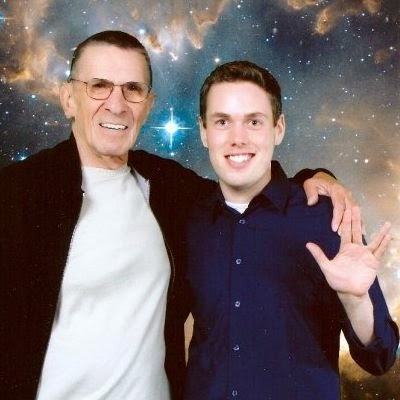 When Spock dies in Star Trek II: The Wrath of Khan, Dr. McCoy says "He's not really dead as long as we remember him."  We can be assured that Leonard Nimoy will never be forgotten and so, in some way he will always be alive and with us.

As many people do, I identify with the character of Spock.  Growing up, I was always an outsider -- struggling to find a place where I belonged.  For years, I had a constant internal struggle about my sexual orientation.  Spock's struggle as a half-Human, half-Vulcan resonated with me but I don't think it would have done so if not for Nimoy's nuanced performance.  Nimoy understood that struggle and it was almost always present on screen even if it was not the subject of dialogue.  Nimoy brought to Spock an honesty and gravitas that cemented the character as one of the greatest in film history.

Nimoy played Spock in 80 episodes of TOS, two episodes of TNG and in eight feature films.  He also provided the voice of the character in 22 episodes of the animated series.  Spock appears in just over 100 hours of Star Trek on film but that represents thousands of hours in the make-up chair having his ears applied and thousands of hours on set, working with the character.  Of course, Nimoy also provided Spock's voice for video games and inspired hundreds of writers who used the character in Star Trek novels and fan fiction.  There is nearly 800 hours of Star Trek on film and even when Spock had nothing to do with the story on screen his spirit was almost always present.

There is no person and no character more tied to Star Trek than Leonard Nimoy and Spock.  Even those who have never heard of Gene Roddenberry have heard of Spock and Leonard Nimoy.  Around the world, in every country, the image of the stern face with the gracefully curved ears and upswept eyebrows is instantly recognizable.  It conjurs images and thoughts of space, adventure, logic, stoicism, diversity and intelligence.  The look of Spock informed the look of nearly every other Vulcan and Romulan who would appear in the Star Trek franchise and actors like Tim Russ, Jolene Blalock and Zachary Quinto have repeatedly said how much they relied on Nimoy's work to inform their own. 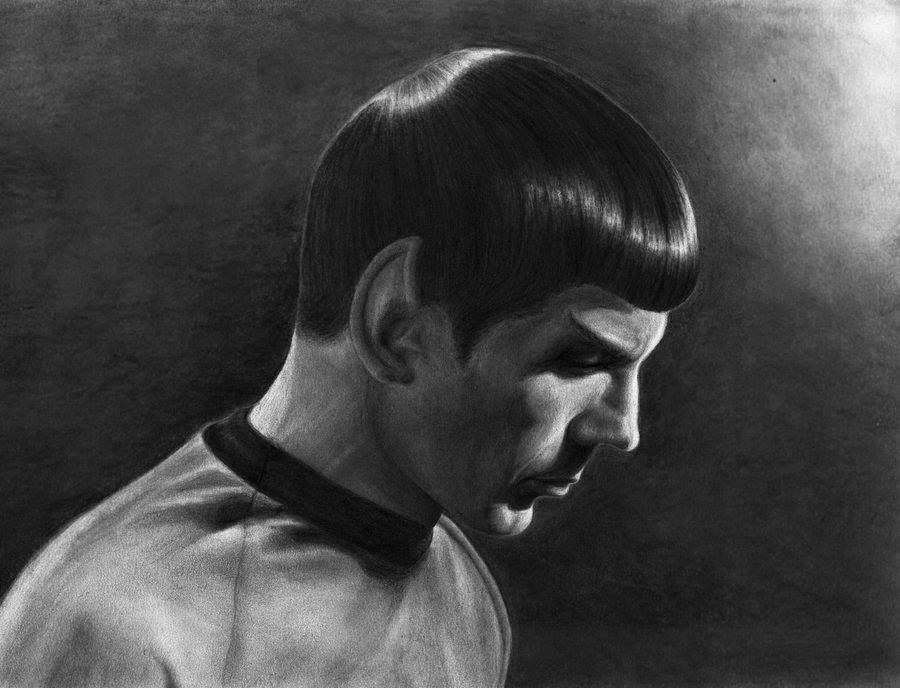 More than the public face of Star Trek, Leonard Nimoy was once called the "conscience of Star Trek" by Gene Roddenberry.  I couldn't agree more.  In interviews, Nimoy was the most eloquent at expressing what Star Trek was about and how it functioned.  Nimoy guided Star Trek's storytelling on The Wrath of Khan, The Search for Spock, The Voyage Home and The Undiscovered Country.  He understood the characters and the themes more than anyone else and those films would not be as wonderful without Nimoy's work behind the camera.

I had the sense, over the last year or so, that Leonard Nimoy knew his time was short.  After he announced that he suffered from COPD he missed no opportunity to warn people against the dangers of smoking.  I believe smoking was his one true regret.  In interviews during his last year, Nimoy seemed to me to be greatly enjoying his life.  He spent time with his family and seemed very at peace with his legacy.  Nimoy's final message to the world was in a Tweet on February 22nd: "A life is like a garden.  Perfect moments can be had, but not preserved, except in memory.  LLAP." 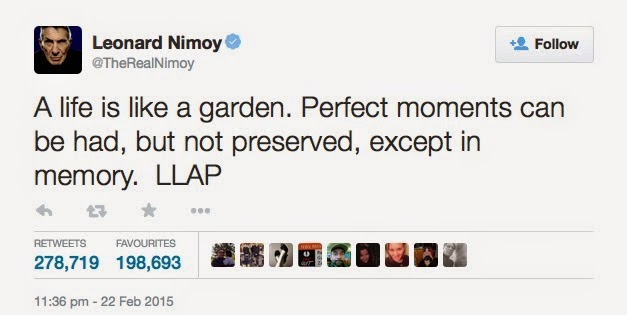 I miss Leonard Nimoy.  I think of him every day and I have wept more tears in the last week than I would have thought possible.  To me, Leonard Nimoy was family.  I know him better, in fact, than I do some of my biological relations.  Nimoy and Spock have inspired me, educated me and helped to inform the person I am today.  There are moments when my heart hurts and the vacuum left by his loss seems deafening but then I see a photo of him smiling or remember a clever Spockism and my mood is brightened.  The world is a richer place for having had Leonard Nimoy in it.  He will live on, not only in the art he has left us, but in the memories and emotions he has inspired.