I didn't post this over the weekend because I wanted to be sure but it appears we officially have some good news and some bad news regarding Star Trek XII.  Spoilers below...

Did anyone watch CNN's coverage of the shuttle Enterprise coming to it's new home on Friday?  They interviewed Leonard Nimoy who, for the first time in a decade, has long-ish hair.  It made me think of his Spock hair.  Then he said "we're talking" in relation to a question about whether he would appear in future Star Trek films. 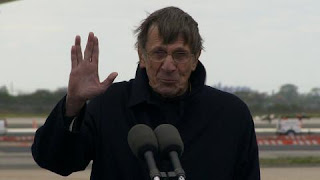 Well, it has now been confirmed that Leonard Nimoy will be back as Spock Prime in Star Trek XII.  Maybe they didn't use a wig this time if his hair was long enough?  Regardless, this is definitely good news!  The only thing I really liked about Star Trek XI was Nimoy's appearance so I'm happy he's returning. I hope that this means we'll get a bit of a Vulcan storyline and see what's happening with the rebuilding of Vulcan civilization.

And now for the bad news...

It's also been confirmed that Benedict Cumberbatch will be playing Khan.  Let's set aside the problems with a caucasian actor who has an English accent playing an Indian prince and just stick to story.  This is not entirely surprising but it is really disappointing.  I was hoping that in this new film, now that a new universe has been established, the filmmakers might try to do something really original.  It seems to me, the only reason to reboot or remake something is to bring something new to it.

Khan is one of the strongest villains with one of the strongest storylines in the Prime Universe.  Why go there again unless you have absolutely no confidence that you can come up with something original?  Of course it's too early to say what the film will deal with but it doesn't inspire confidence in me that Star Trek XII will be any better than the 2009 film.